Two days ago, my family and I went to Wat Pha Lat. It is a temple high in the mountains with only one road and trail leading to the peak. The temple is nestled in the forest beside a beautiful waterfall overlooking the city. Ancient Buddhist statues dot the cliff, making you feel like you are in a forgotten place. The temple has been standing for more than 500 years. It was built during the reign of King Kuena from 1355 to 1385. The story begins with the royal party journeying to the top of Doi Suthep while the king rode on his white elephant. One of Buddha’s bones was placed on the elephant with the king. Once they arrived at the top, the elephant trumpeted three times and then died in exhaustion. That was declared an omen and the king immediately ordered Wat Phra That Doi Suthep to be built. Later, he declared the erection of three temples on the mountain, all places where his elephant had rested.

We began our journey in a Grab taxi that dropped us off at the Basecamp Trail Cafe. After gobbling down a few bites and buying a drink to keep us energized, we started walking up the road to the Monks Trail. Ascending the tiring uphill, we eventually reached the opening of the trail. We hiked along the winding beaten dirt path to the temple. 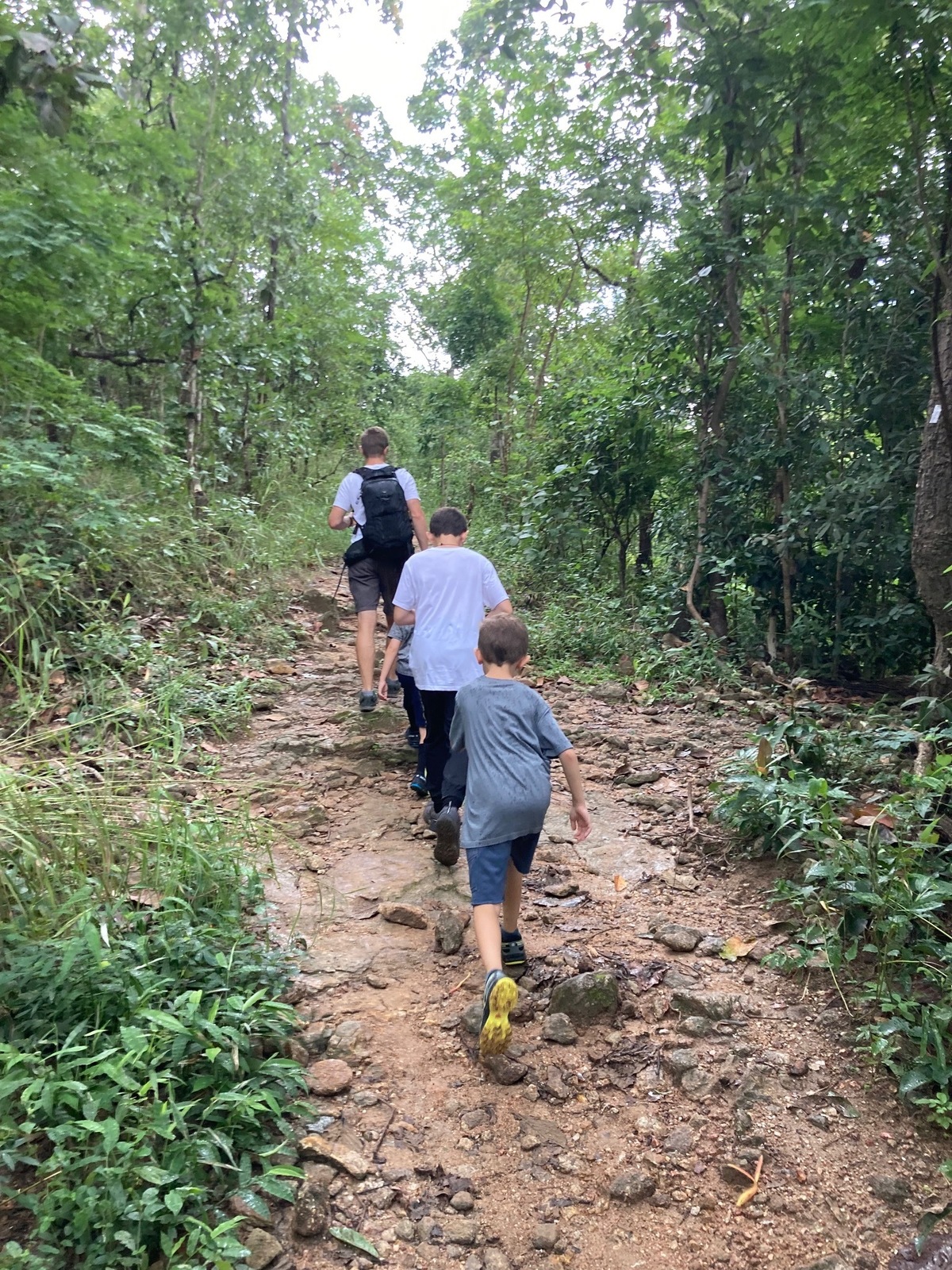 I'm not going to name names, but there were some complaints because of all the humidity in the air. Halfway through the hike, raindrops began to fall. In Thailand, if you feel a few drops, you know that a downpour is in your near future. Miraculously, the rain did not worsen and eventually stopped. We reached the temple and marvelled at the rock statues scattered around it. 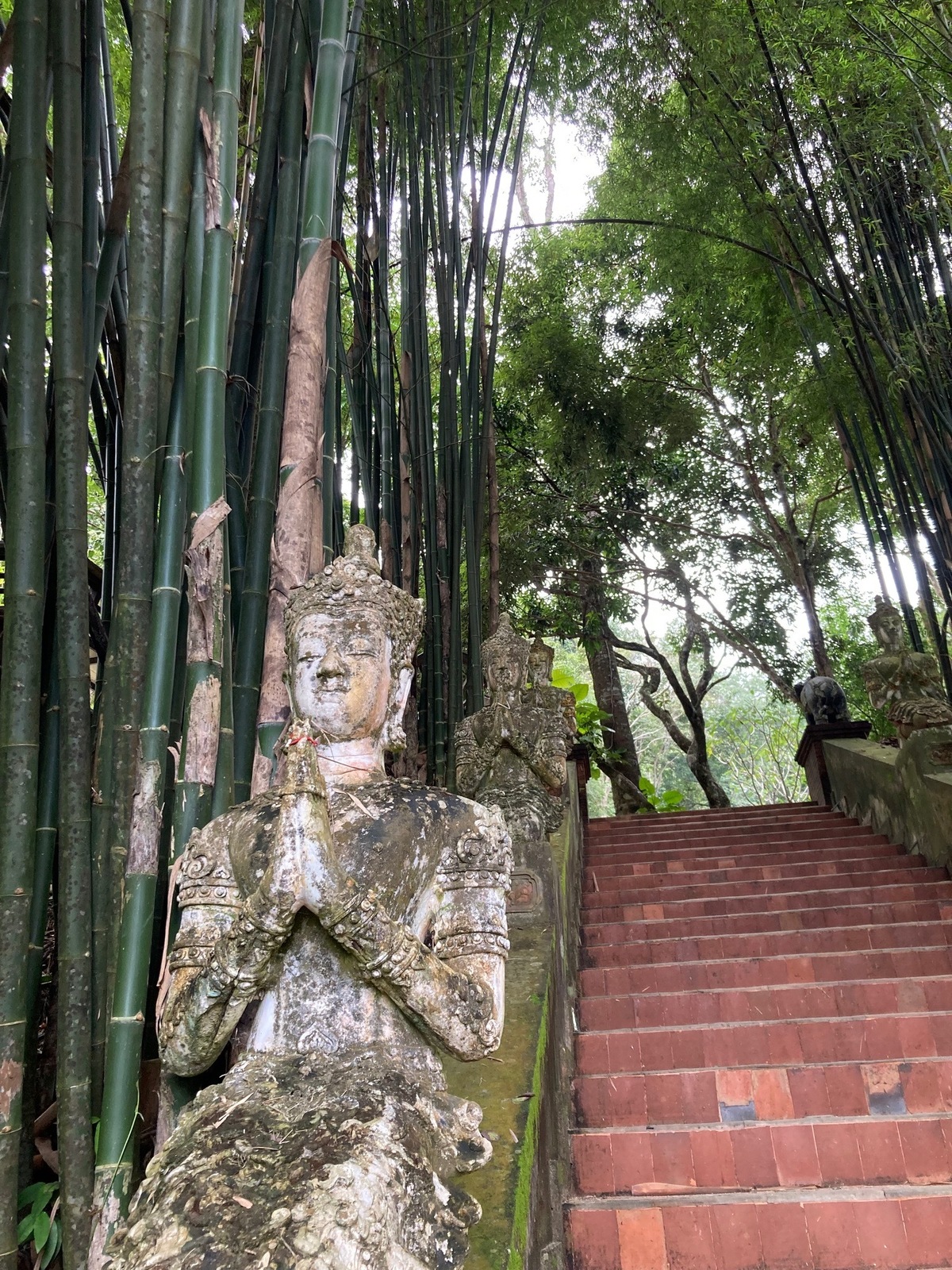 We walked up a few steps and reached a meditation site with an amazing view of the city. Passing statues of Buddha, we wandered through the temple and found an ancient wat, covered in moss. 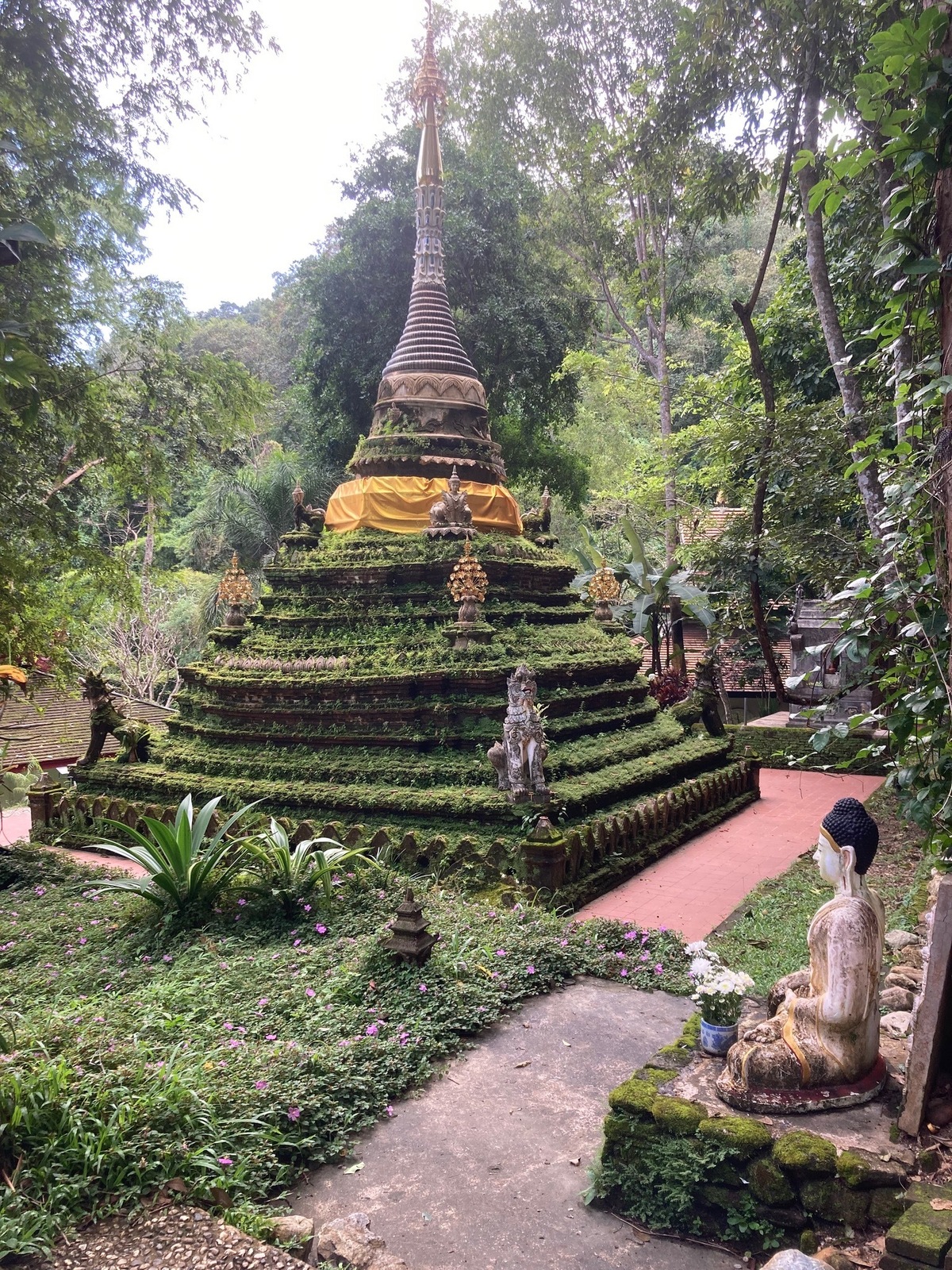 This temple holds different kinds of architecture. In 1934, the temple fell into disrepair and a prosperous Burmese businessman worked on reconstructing it. The Burmese influence can be seen in the architecture of the newer buildings through symbols and design used in Burma. Another design in Thai architecture modelled heaven which created a sense of peace, lightness, and floating. Lightness was usually symbolized by curves. This technique wove Buddhist philosophy into traditional Thai architecture. 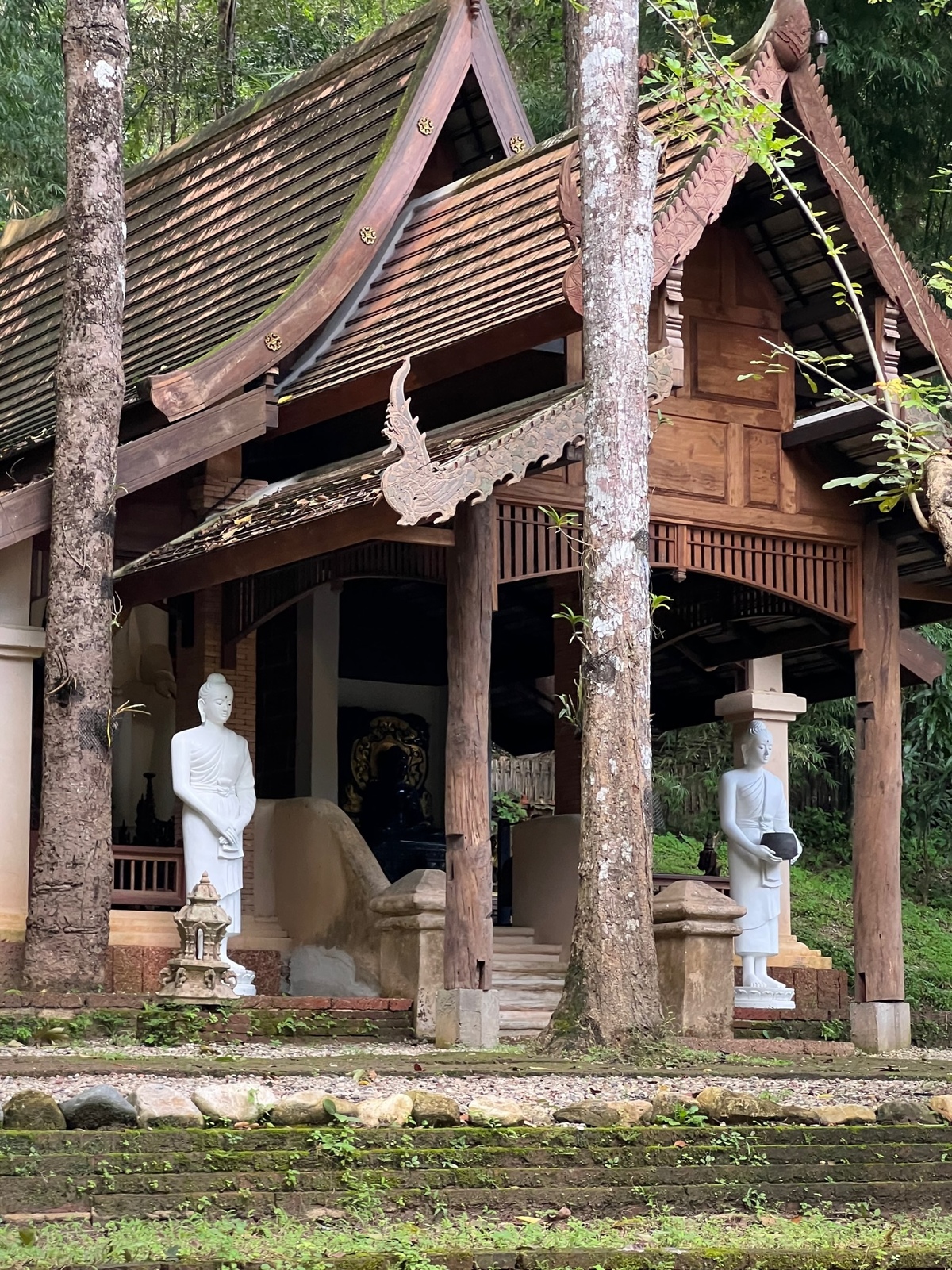 The curving design appeared in several spots of a temple, such as an arched roof and the base design. Steep roofs or multi-tiered roofs symbolize the achievement of wisdom or nirvana. This is the symbol of peace and lightness. Peace can also be represented in the symmetry of a temple, which is often visible in Thai temples regardless of the shape. 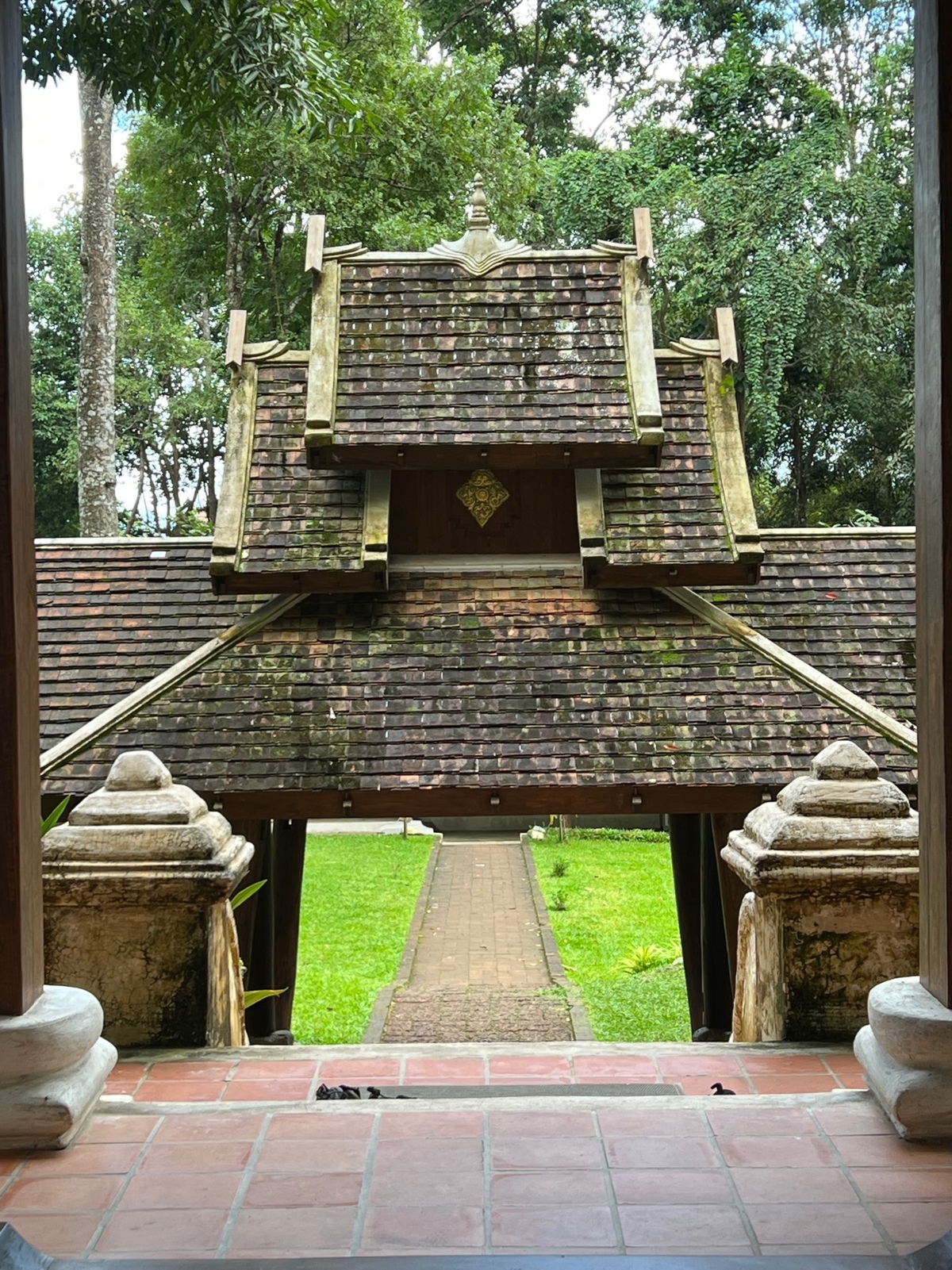 Suddenly, we heard an electrical whine which refused to stop. By that time we had already explored most of the temple so we decided that it was time to leave. We negotiated the songthaew's price in our broken Thai, piled into the taxi bus, and watched the ancient wat fade into the distance. 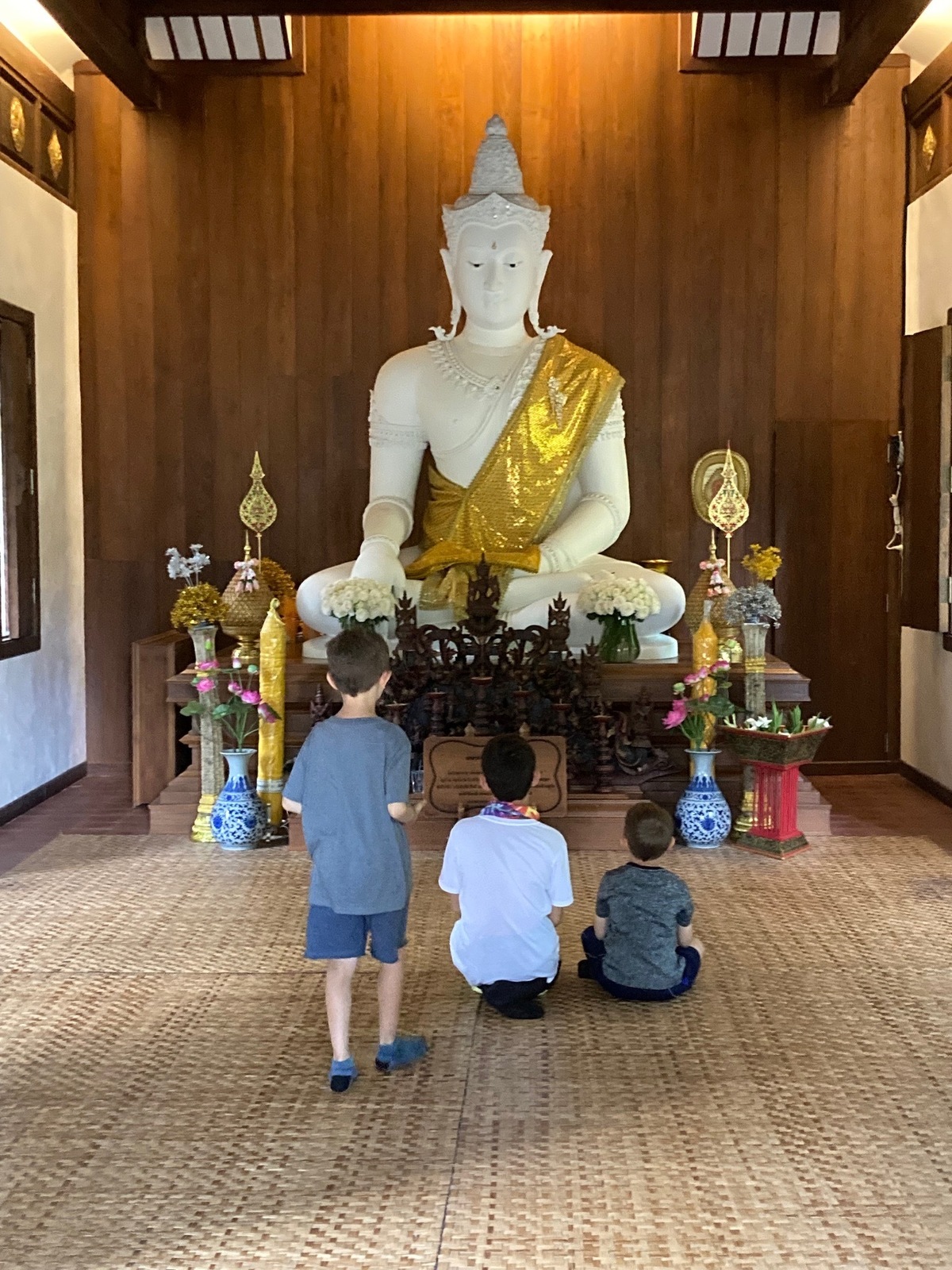 I have decided to keep track of every single book I read during this trip on this page. This list will keep growing as the trip goes on. Feel free to read the books I have on here, and suggest other books for me to read in the comment thread below! The asterisks next to the books are the ones that I really enjoyed.